All for Joomla All for Webmasters
RegisterLogin 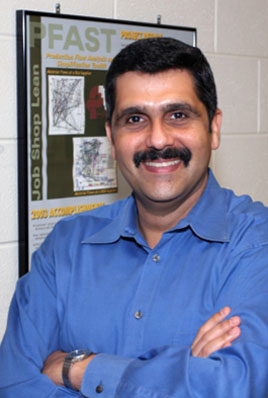 Dr. Shahrukh A. Irani is the President of Lean and Flexible, llc, a consulting company that he started in 2014 to deliver consulting and training services in Lean for high-mix low-volume manufacturing (aka JobshopLean). Previously, from 2012-2014, he gained invaluable industry experience as the Director of IE Research at Hoerbiger Corporation of America, Inc., Houston, TX. In that position, he undertook projects to demonstrate the viability of JobshopLean in their high-mix low-volume (HMLV) manufacturing facilities. Prior to his industry job, from 1996-2012, he was an Associate Professor in the Department of Integrated Systems Engineering (ISE) at The Ohio State University (OSU). His research at OSU produced JobshopLean, a comprehensive methodology to adapt Lean for high-mix, low-volume (HMLV) small and medium enterprises (SME). Also, his team developed the PFAST (Production Flow Analysis and Simplification Toolkit) software that facilitates the implementation of JobshopLean.During his sixteen years at OSU, he received the Outstanding Faculty Award for excellence in teaching from the ISE department’s graduating classes of 2002, 2003, 2004, 2005, 2006 and 2009 and the 2002 Charles E. MacQuigg Outstanding Teaching Award from the College of Engineering.He served as the Director of the Facilities Planning and Design (FAPAD) division of the Institute of Industrial Engineers for 1999-2001 and 2001-2003. He is the Editor of the Handbook of Cellular Manufacturing Systems (1999, John Wiley). In 1996, Dr. Irani was voted Young Engineer of the Yearby the Minnesota Federation of Engineering Societies and the Minneapolis Chapter of the Institute of Industrial Engineers.